The Malthusian theory and population growth in the United States

American population is going through consistent shifts. The population continuously grows and expands to very high measures. Population capacity is a serious issue that needs to be addressed in society because when the population increases, the number of resources and supplies will slowly decrease or become unavailable. Here are the reasons why overpopulation could not happen:

The main theory about overpopulation is commonly related to the Malthus Theory of population. According to Agarwal,  “The Malthusian Trap (or “Malthusian Population Trap”) is the idea that higher levels of food production created by more advanced agricultural techniques create higher population levels, which then lead to food shortages because the higher population needs to live on land that would have previously been used to grow crops” (Agarwal). The Malthus theory was trying to prove that with a growth in population, the amount of food will slowly decrease and the population will have to ration the food and supplies that they have in stock.

According to Kwatiah, “Malthus could not foresee the unprecedented increase in scientific knowledge and agricultural inventions over a period of time which has stayed the law of diminishing returns.” However, the Malthus theory was not able to understand or see the unpredicted future events that could happen. For example, in the spotlight of 2020, we have the uprise of COVID-19 and the spike of this virus changes the population due to the fact that more people are dying and are being affected by COVID-19. This theory is plausible in the sense of the world’s population growing, but not having any sudden outbreaks and the possibility that supplies cannot be produced at faster rates.

According to the Population Reference Bureau, the population is not growing at such fast rates. The graph above is indicating the projected total population of the United States, and that number is slowly decreasing over the next 40 years. 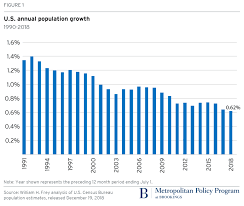 The graph above is showing the United States annual population and over the course of 1991 to 2018, the percentage in which the population grew has a downward trend. The Malthus theory would argue opposite this theory because the theory was in support of the population growing and less food rationing for the population.

The question of whether overpopulation is happening will always have differing perspectives. According to Stebbins, “Florida reported a larger net increase of residents from other parts of the United States from 2016 to 2017 than any other state. It also had the second-largest influx of international migrants among states” (Stebbins). In this instance, the Malthus Theory could be proven as right because the state of Florida is increasing meaning that with more residents, the ratio of supplies toward certain households may be cut or they will have a limited supply of items. However, overpopulation could not occur in all states,  “Over the past nine years, New York is the state with the largest out-migration, losing 1,379,210 of its residents. They are among more than 2.5 million residents of the U.S. Northeast who have moved to other regions, making it the most widely abandoned part of the country” (Welna). Overpopulation could happen in just particular states, but the states that are having more migration occur are an example against the Malthus Theory because more migration means a smaller population and with a smaller population means a better ratio of supplies and food for the public in other states.