Is Lebron James really the G.O.A.T (greatest of all time)

Lebron James may be one of the best players the NBA league has ever seen but, is he considered the goat (greatest of all time)? Lebron has been in the league for 16 years and has numerous accomplishments. He won awards like most valuable player multiple times, All-Star games MVP, and championships. Throughout his years playing he struggled. Lebron remained in the spotlight being the biggest prospect out of high school. Lebron James is not the goat of the NBA. Lebron’s playoffs record hurts his legacy being 3-9 in the final series.

Absences In Most Important Moments
Lebron James has not been able to live up to the name of being called the goat. Being in the NBA for 16 years and, only being able to only win the title three times. Out of the nine times in the finals he only showed up once in the finals series when it actually counted.

Most of the series he only achieved the win because the help from teammates like Kyrie Irving or Ray Allen making the clutch shots. Being in the finals nine years straight to only win three times is pitiful. He should not be called the goat when players like Michael Jordan went to the finals six times and won every year. The NBA finals is where you showcase your best talent and show you are the best player in the league. 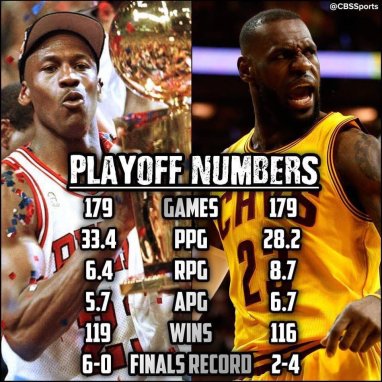 Most players in the NBA have achieved three or more rings in their NBA career. For example, young NBA player, Patrick Mccaw has three rings having being in the league for four seasons.

Lebron can put up thirty points a night but, his winning percentage in the finals is awful. Holding a record for the most appearances in the finals by an NBA player. Lebron being compared to Michael Jordan or Kobe Bryant is pointless because he doesn’t have six or five rings.

Different Conferences
Basketball is a team sport and every year Lebron went to the playoffs or finals he had key pieces. Being on the eastern conference gave Lebron a advantage. The east is considered the weaker conference not having the best players in the league. He spent most of his career being able to out shine every player in the conference.

Struggling in the Western Conference

on the western conference and did not make the playoffs. It was a shock to everybody seeing him struggle in a harder conference thinking he was ready for the challenge. Some NBA players like Kawahi Leonard won a title in both conferences and was NBA final’s MVP for both but is still not talked about as the best player .

Never will be the G.O.A.T
Lebron James will never be a goat in the NBA with his finals record blocking his crown. Even though Lebron is the most popular and the most talked about players in the world today he will never be the greatest player. A record in the finals of 3-9 is the worst by superstar player like him. Only being able to achieve three rings throughout his career.

There has been multiple moments when Lebron has been on a team with other all stars. Lebron’s game became questionable if he is most important player for the roster. He may achieved multiple awards but he will always be in the shadow of Michael Jordan until he gets six championships rings or more.