Who Will Be the Next Mr. and Miss Delaware State University?

This is when the candidates who are running for positions are announced to the school. The candidates are judged by selected officials who give points for professionalism, poise, and proper etiquette.

Tahjah Warner, Miss DSU candidate,  expressing why she feels she deserves the crown.

The theme for the pageant was Harlem Nights Lights. The candidates for Miss DSU are Tahjah Warner and ShaDonna Hunton. Mr. DSU candidates are Marcus Dunn and Alimamy Conteh.

The candidates came out with tons of enthusiasm and had a collaborated dance routine to start off the pageant. They then announced their names, titles, classifications, and gave a speech as to why they deserved to be the next representative for the university. The judges, family members, and fellow students listened attentively to the candidates give their reasoning as to why they felt they deserved to win.

The second round of the pageant was the talent portion. Tahjah Warner pulled on the hearts of the audience as she gracefully danced across the stage. Alimamy Conteh passionately sang “Take Me to the King”. Marcus Dunn executed spoken word.  ShaDonna Hunton used her creative side and painted on stage.

Last, the candidates strolled across the stage in their ball gown attire as they waved gracefully to the audience members. Nia Curry, an attendee and student at DSU, said “I am excited to see who will win. Campaign season gets all the students involved and there are tons of events to go to on campus”. Students who are running for the smaller class officer positions stood and addressed themselves to the crowd before the audience was let out. 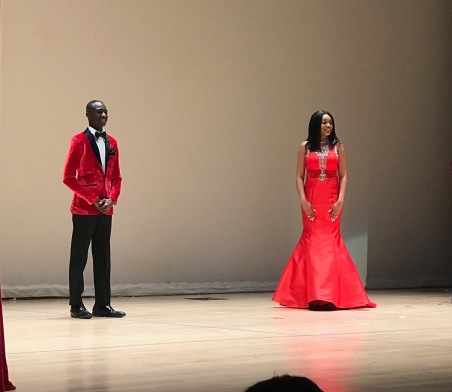 The ball gown and final portion of the Harlem Lights pageant

This past week has been filled with chaos and fun. Social media has been filled with students advocating for their chosen candidates. The Martin Luther King student parlors has been bustling with activity for the past week. Candidates have been promoting themselves by giving out raffles and food, doing dorm walks to share their flyers, and posting their campaign videos for all to view.