On Saturday, the Hornets Men’s basketball team took on North Carolina A&T in a MEAC contest. The Aggies won the game 93-70 due to a relentless 3- point attack lead by Terry Harris.

The Hornets shot 41% from the field for the game; shooting 35% from three point range. The Hornet’s out-rebounded the Aggies, but failed to bounce back with points on the board. The Hornets also shot 57% from the free throw line. 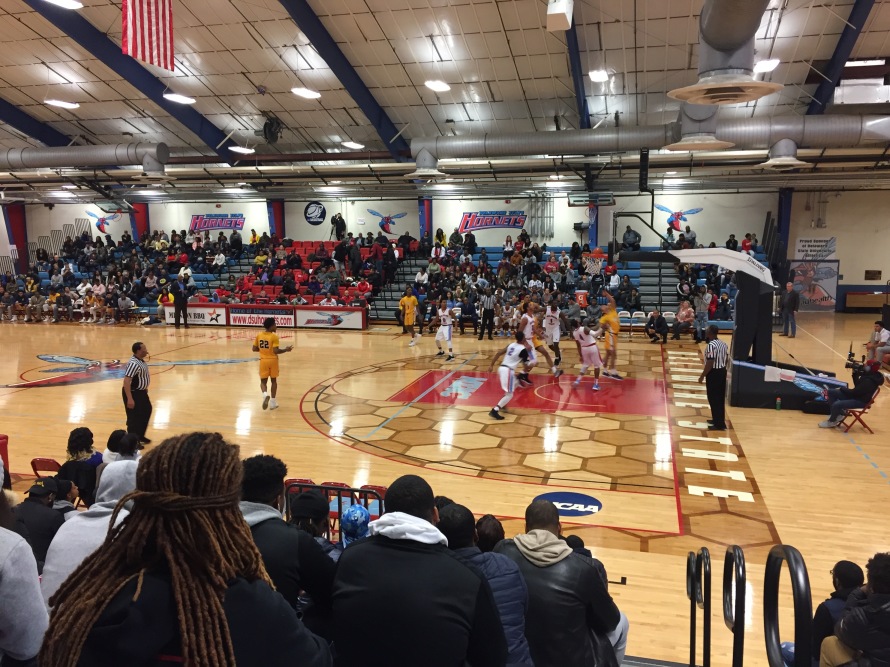 In the first quarter the Hornets and Aggies were going back and forth. The score was 34-27 with 4:20 to go until the half. After the shot clock violation, the Aggies begin to pull away with the lead due to Terry Harris’s fifth-three pointer. Sophomore, Pinky Harris, answers back with a three of his own to lower the deficient. Terry Harris keeps his foot on the peedle and snaps back with his sixth three-pointer, taking the life out of the hornets fans. After a missed shot from the Hornets, Aggie Terry Harris hits another three bringing their lead to fourteen. At the half the score was 48-33.

After the Halftime entertainment Pinky Wiley comes out with a quick three to open the quarter.  Following the three Quavious Copeland answers back with a lob pass followed by a monster slam by Ibrahim Sylla. The Aggies opened up the half with a 14-2 run which gave them control of the game. The Aggies lead 69-43 with 12:09 left in the game.After a missed shot by the hornets Aaren Edmead drives hard and finishes to push the lead to 17. Terry Harris hits his seventh-three of the game to push the lead to 20.

Pinky Wiley was the highest scorer for the Hornets with 18 points, and the highest assists. “I give all credit to my team and coaches for putting me in the right positions to score.”  Wiley considers himself to be leader on the team. On the court, Wiley was seen directing his team to gain the most leverage in winning this game.

“Defense, making shots, and shots selections”, said Wiley when asked about improvements as a team. The Hornets may need to make these types of improvements to win future games. But as a team, they have an undeniable chemistry as a whole. Briana Broughton, junior, said “I thoroughly enjoyed the game, It was amazing to see how much heart and hustle they had as a whole team.” The Hornets had exactly that on Saturday, hustle and heart.

Ronald Lucas and Kevin Larkin try to bring the team back near the end of the game. The Aggies three point attack could not be stopped. The Aggies dribble it out to end the game. The Hornets look to bounce back Monday when they finish a three game homestand versus North carolina central.