One of the biggest complaints that often surround award shows such as the Emmys and Academy Awards is the startling lack of diversity found within their nominees, as well as their winners.

The issue most noticeably came to a head during the 2016 Oscars, in which every single nominee, for the second year in a row, was revealed to be white. The occurrence caused such a storm that many actors simply refused to attend.

“At the Oscars … people of color are always welcomed to give out awards … even entertain, but we are rarely recognized for our artistic accomplishments,” are the words of Jada Pinkett Smith, when calling for a boycott of the “whitewashed” Oscars. The hashtag “#OscarsSoWhite” was even started, and trending, on Twitter at the time.

Not Much Has Changed

Many award shows have since then tried to avoid such a scandal, most notably the 2018 Emmys, by boasting having “a record number of Black actors (29)…nominated, shattering 2017’s record of 19.” However, these nominations were proven to be in vain, after only 7 winners were found to be African American.  “It was honestly disappointing, yet not unexpected,” were the words of one Del State student, Angela T. 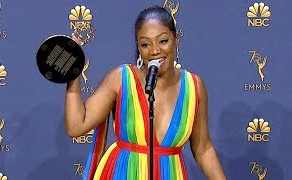 Such a turnout lead many viewers to feeling cheated, especially after the Emmys were shown to be flaunting the 29 nominations, only to have less than 25% of the African American nominations actually take home a win. Taking into account the lack of diversity that exists within the voters as well, it is really no wonder Caucasians also dominate the wins. This diversity issue is one that has been in discussion for many years.

The outcome brought much disappointment that comedian, Michael Che, saw fit to give “Reparation Emmys” to African American “TV legends and heroes (who) have gone unrecognized.” The winners of these awards included actors such as Jimmie Walker (J.J Evans on “Good Times’) and Jaleel White (Steve Urkel on “Family Matters”).

All About the Campaign

Additionally, though believed to be purely a way to reward artists, whether they be writers actors, etc, for extraordinary work, many award shows are much more political than to be expected.

For an artist, the work does not stop at the nomination. While the nomination has only put artists in the race, in many cases, it is up to their campaigning to take home the win.

In the case of the Academy Awards, it has been said to take “…scheming and brainstorming and gobs and gobs of money,” to take home an Oscar, no matter how talented one may be. It is because of this that many award shows are seen as popularity contests rather than actual judges of talent.

In the midst of all of the controversy, what award shows have left viewers and nominees alike  wondering is if watching, and participating in them, is really even worth it.