Men’s Council to Show “The Mask You Live In” Documentary

On Tuesday, January 19th, at 7 PM in Parlor A of the Martin Luther King Student Center, the Men’s Council will be hosting a screening of the documentary “The Mask You Live In,” which will discuss many of the issues that boys and men face in today’s society.

Too often the problems and concerns pertaining to men are minimized or simply not addressed at all.

Today’s society tells young males to “man up” or “stop being a sissy,” without ever fully explaining what masculinity actually entails. 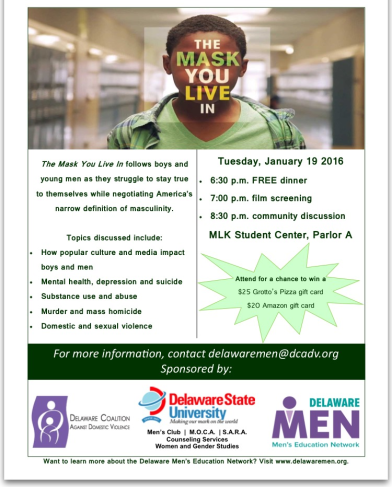 “The reason for showing the film at DSU is because of the connections explained between the interactions of men with each other as well as women can be viewed and explained through such a simple format as the documentary highlights. This film screening is just one more step at furthering the conversation about gender roles and habits of behavior within our young men and women,” shared Sheppard.

He believes that this documentary can answer some of the subconscious questions that males have asked themselves at one time or another such as, ‘What does it mean to be a man in modern society?’ and ‘How does a man display masculinity without diminishing women?’

Sheppard added, “I hope the audience walks away with a wider view of the psychological and sociological effects of stereotyped conditioning that happens at such an early age within our societies. The documentary opens up all new kinds of questions for how we view each other and what masculinity is within the adolescent stage.”

Check out the trailer to “The Mask You Live In” here.