On Wednesday night, the women and men’s basketball team went and put a dazzling show of electrifying scoring and high-flying action. After losing a hard fought game versus Hampton University in the MEAC conference championship game last year, the men’s basketball team believes that this year, things will be better.

Captain of the men’s team, senior forward Jason Owens said ,“We have the same amount of talent, we lost a bunch of scorers but we replaced those with the transfers and freshmen”. With such faith in themselves, the Hornets believe that they can win the MEAC and even go to the NCCA tournament. 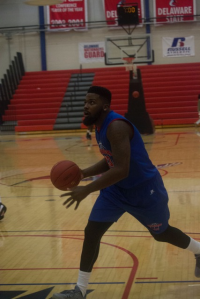 The Lady Hornets on the other hand are coming off one their worst seasons in their teams’ history, but the Lady Hornets believe that the team will be ready for the season as long as they make some changes. With the team going through a serious rebuilding starting with the coaching staff, the players believe that they have a chance to change how things were.

“I’m really confident this year, we have a brand new coaching staff. Few of them are alumni, so we’re expecting a lot of wins this year.” said senior captain N’kayah Kersey Their aspirations are even beyond the regular season, as they want to be the best team in MEAC.

November 13th, Men’s Basketball suffered an unfortunate loss to Route 1 Rival University of Delaware after leading throughout most of the game. Women’s Basketball will take on the West Virginia Mountaineers on November 15th at 7pm.

In the previous year, the Lady Hornets won only two conference games. Hopefully both team’s hard work pays off and their season goals come to fruition.