Welcome to the Athletic Hall of Fame, 2015 Alumni Inductees

September 18th was a special night for Delaware State University’s alumni. Alumni and their families came dressed to the nines to celebrate the admission of 13 inductees into the Athletic Hall of Fame.

It was an intimate affair as the thirteen were inducted; they were announced by Master of Ceremonies Willie Jeffries, a coaching legend and place holder in seven halls of fame, as each inductee came up amid applause from the audience, and were presented with jackets and their plaque by DSU’s President Harry L. Williams and the Athletics, not “Athletic” Director, as Jeffries joked, Louis “Skip” Perkins.

They were briefly interviewed about their time on their respective sports teams and at their lives attending the college. The Hornet was able to catch up with a few of the inductees to talk about their feelings about being inducted. 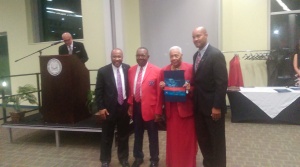 “I can’t recall any feeling in my lifetime that will equal to this,” exclaimed James F. Marshall. He went on, “This is the greatest thing that ever happened to me in my adult years.”

His wife, Mary, vocalized her thankfulness and happiness with her charming southern twang, “It has been a great experience; something that I never thought would happen. And I was so happy to be inducted into the 2015 Hall of Fame.”

Willie B. Moore Jr. for Football at DSC in the late 1960s and early 1970s was very clear about how much his induction meant to him, “It was a great honor.”

Karen Rogers said, “I’m very excited and very joyful to even be invited out here.”

When asked if she even expected to be inducted despite the numbers she put up in her basketball collegiate career, “I didn’t, I really didn’t.”

Jimmie Strong, the representative from Hall of Fame Committee Champion Fund for student athletes, revealed at the end of the ceremony that the plaques of all the past and future

inductees will be hung in Memorial Hall in the new weight room so that all student athletes will know that they too can be great in their collegiate sports careers.